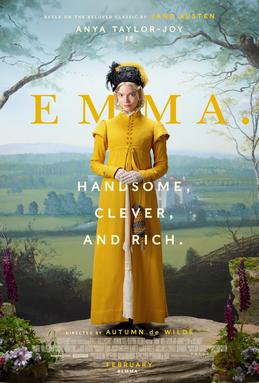 Based on: Emma by Jane Austen

Emma is a young and rich heiress who takes an interest in matchmaking after her former governess Miss Taylor marries the man she introduced her to.

Mr Knightly, her friend and neighbour, advises her against interfering into the love lives of others but Emma has other plans in mind….

Emma is a spoiled and overconfident young woman. With a privileged background and a large inheritance she is in no need of a wealthy husband and spends her time meddling into the love lives of her friends and neighbours. She takes great pride in her ”exceptional matchmaking abilities” and fails to notice obvious hints of the involved persons’ desires. Her belief of being ”superior” as well as ”perfect” makes her occasionally inconsiderate to the feelings of others to the point of making her seem cold-hearted and disrespectful.

Mr Knightly is kind and compassionate. His good judgement and high moral code make him clash quite often with Emma’s unacceptable behaviour and tactics. Although generally a polite person he possesses a sharp tongue which he uses on Emma when she behaves improperly, for the sole reason of making her understand her mistakes and improve her character qualities.

Wealth and social class play a significant role into the interpersonal relationships between the diffferent characters. Emma and Mr Knightly are at the top of the social pyramid while all the others are ”slightly” or ”more” below. Considering marriage to someone of a lower social standing it was something controversial and not easlily accepted. Marriage was essential for a woman of low means in order to survive respectfully and not be forced into seeking employment as a governess or servant. However rich heiresses, like Emma, didn’t have to look for a suitor to secure a living and could live comfortably by their own.

Hybris is a factor which is integral to Emma’s character and interactions with others. Having been the apple of the little communities’ eye for years she thinks herself better than all of them and doesn’t realise that meddling indiscriminately into the lives of others is something shameful.

Emma manages to devotedly portray the social background of Regency England along with fun and didactical qualities that make it an overall charming film.