Skip to Content
Home History A Day in History Félicette 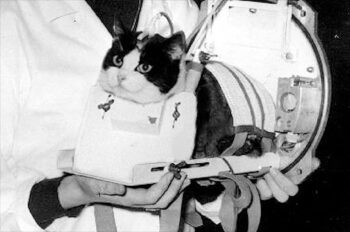 History of Launching Animals into Space

On 3 November 1957, the Soviet Union launched Laika, a stray dog found on the streets of Moscow, into space on Sputnik 2. She died in space but was the first animal to orbit the Earth.

Brazilian Army colonel Manuel dos Santos Lage planned to launch a cat named Flamengo aboard the Félix I rocket on 1 January 1959, but the flight was cancelled over ethical concerns regarding the use of a cat.

On 31 January 1961 as part of Project Mercury the chimpanzee Ham became the first hominid launched into space for a suborbital flight.

On 29 November 1961 Enos became the second chimpanzee launched into space and the third hominid after cosmonauts Yuri Gagarin and Gherman Titov to achieve Earth orbit.

The French rocket program began in 1961. Flights of the Véronique rocket had been reinstated in 1959 and were run by the Comité des Recherches Spatiales (CRS).

France’s base in the Sahara launched a rat named Hector on 22 February 1961, causing France to become the third country to launch animals into space.

Hector had electrodes implanted on his skull so neurological activity could be monitored. Two further rockets with rat payloads followed, on 15 and 18 October.

French scientists wanted to use larger mammals and chose cats since they already had a significant amount of neurological data on them.

Preparing for the Launch

In 1963 Centre d’Enseignement et de Recherches de Médecine Aéronautique (CERMA) purchased 14 cats from a pet dealer for the testing, with the individual animals selected based on their temperament (all of the cats were female due to their calmer demeanor).

The cats were unnamed prior to the launch to reduce the likelihood that the scientists would become attached to them. All of the cats had permanent electrodes surgically implanted into their brain to assess neurological activity.

Some of the cats’ spaceflight training was similar to training for humans. This was carried out by CERMA and included using the high-G centrifuge three-axis chair with simulated rocket noise.

Cat-specific training included confinement in their container and experience withstanding the restraint cloth. The animals trained for about two months as this limit was set by the risk of electrode polarization.

The launch crew began preparing at the launch site on 8 October 1963. On 11 October, the heading beacon was tested by placing it in a helicopter and tracking it with ground stations. On the 12th, the telemetry in the nose cone was unsuccessfully tested, followed by a successful test the next day. There were issues testing the homing beacon on the 14th and 15th, but all of the electronics functioned to a satisfactory level on 16 October.

On 17 October, six feline finalists were selected as candidates for the flight, and a tuxedo cat with the designation C 341 was chosen for the flight on launch day, along with a backup. Weighing in at 2.5 kilograms (5.5 lb), C 341 was selected as the best of the six finalists due to her calm demeanor and appropriate weight.

Electrodes were attached to her forward left and right rear leg to monitor cardiac activity. Nine electrodes had previously been implanted on her skull: two in the front sinus, one in the somatic area, two in the ventral hippocampal, two in the reticular area, and two in the association cortex. Two electrodes were glued to a foreleg so that electrical impulses could be used to stimulate them during the flight. Two microphones, one on her chest and one on the nose cone of the rocket, monitored her breathing.

The launch vehicle used was the Véronique AGI 47 sounding rocket, made in Vernon, Haute-Normandie. The Véronique rocket came from the German World War II Aggregate rocket family, developed for International Geophysical Year in 1957 for biological research.

On 18 October 1963 at 8:09 am, C 341 was launched into space from the Centre interarmées d’essais d’engins spéciaux site in Algeria. The mission was a sub-orbital flight and lasted 13 minutes. The rocket engine burned for 42 seconds on ascent and C 341 experienced 9.5 g of acceleration.

The nose cone separated from the rocket before reaching a height of 152 kilometres (94 mi) and the cat was subjected to five minutes of weightlessness. Prior to parachute deployment, spin and vibration on the nose cone caused 7 g of acceleration. The parachutes deployed 8 minutes and 55 seconds into the launch, applying 9 g.

Thirteen minutes after the rocket was ignited, a helicopter arrived at the payload. C 341 was recovered safely, and the mission made her the first cat to reach space.

High quality data was recorded throughout the flight other than the reticular measurements and data recorded during reentry. Electrical shocks were administered to C 341 at a higher rate than intended. She was vigilant during the ascent phase, due to being a payload in a rocket.

During the microgravity phase, her heart rate slowed and her breathing became nominal. The turbulent reentry caused her heart rate to rise, but poor data made it difficult to analyze.

The flight’s biological data were given to the media, who named C 341 “Félix” after the Félix the Cat cartoon series. CERMA changed it to the feminine Félicette and adopted the name as official.

Félicette was euthanized two months after the launch so that scientists could perform a necropsy to examine her brain.

A second cat was launched into space by the French on 24 October. An explosive bolt that would release the rocket from the launch pad failed to function, causing the rocket to launch at an extreme angle. The radio transponder stopped working on the launch pad, which created difficulties in finding the rocket.

A helicopter spotted the parachute but was unable to land, so the agency dispatched ground vehicles. They were unable to get past some barbed wire. The next day a helicopter was again dispatched and was able to land at the site. The nose cone where the payload was housed was heavily damaged and the cat had died.

Of the remaining 12 cats that were trained, the fate of 11 is known. One cat’s health was deteriorating after the electrode surgery, so the scientists had her removed.

The group adopted her as their mascot and gave her the name Scoubidou, as she had a scoubidou braid around her neck, a popular style at the time. The other nine cats were decommissioned at the end of the program.

France continued its biological payload research, changing to monkeys. A monkey known as Martine was launched on 7 March 1967 and Pierrette six days later. They were both successfully recovered.

Félicette’s flight was much less popular than other spaceflights at the time. Burgess and Dubbs believe this is due to photos of her with electrodes implanted on her skull and the new animal rights movement.

Former French colonies have created stamps to commemorate Félicette’s flight. The Comoro Islands released a stamp in 1992 as one of a series of stamps featuring animals involved in spaceflight; the stamp mistakenly used the name Félix.

In 1997 postage stamps commemorating Félicette and other animals in space were issued in Chad, again using the name Félix. A 1999 stamp in Niger also used the incorrect name.

In 2017 a crowdfunding campaign was started by Matthew Serge Guy to erect a bronze statue of Félicette to commemorate her contribution to science, as there was no monument dedicated to her at the time.

The statue was designed by sculptor Gill Parker. The preliminary design depicted a cat on top of the Earth,and a plaque featuring the names of major donors was to be included. In April 2018 the project met its £40,000 funding target.

In April 2019 Guy announced that the statue was to be located in Eastern France at the International Space University. The statue was unveiled on December 18, 2019, as a part of the 25th anniversary celebration of the University’s Master of Space Studies program. It stands 1.5-metre (5 ft) tall and depicts Félicette “perched atop Earth, gazing up toward the skies she once traveled”.

The UPS student astronomy club at Université Toulouse III will name its future astronomical observatory in honor of Félicette. It will be the first French observatory entirely managed by students and is due to open in 2021. The 500 mm Dall-Kirkham telescope (3500 mm focal length) will be housed in a motorized dome 3.90 m in diameter.