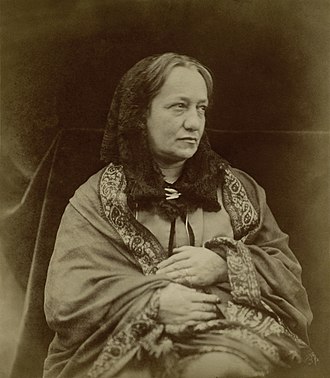 Julia Margaret Pattle was born on 11 June 1815 at Garden Reach, Calcutta, India to Adeline Marie (née de l’Etang) and James Peter Pattle. Julia was the fourth of ten children and one of seven to survive to adulthood, as three of her siblings died as infants.

Her father was a British official from England in India while working for the East India Company. His family had been involved with the East India Company for many years, though he traced his line to a 17th-century ancestor living in Chancery Lane, London. Her mother was a French aristocrat and the daughter of Chevalier Ambrose Pierre Antoine de l’Etang, who had been a page to Marie Antoinette and an officer in the Garde du Corps of King Louis XVI.

Julia along with her six sisters were all sent to France as children to be educated. The Pattle sisters were known for being close, outspoken and unconventional in both behaviour and dress. Julia lived in France with her maternal grandmother from 1818 to 1834, after which she returned to India.

In 1835, after suffering from several illnesses, Julia visited the Cape of Good Hope in South Africa with her parents to recover. While there, she met the British astronomer and photochemist Sir John Herschel, who was observing the southern celestial hemisphere. She also met Charles Hay Cameron, twenty years her senior and a reformer of Indian law and education.

Charles Hay was also there to convalesce, likely from a virulent malarial fever which often spread during the Indian monsoon season. The illness he suffered caused recurring kidney trouble and diarrhœa for the rest of his life. They were married in Calcutta on 1 February 1838 in just two years after meeting.

In December of 1838, Julia gave birth to their first child with Sir John Herschel was the godfather. Between 1839 and 1852, the couple had six children, one of whom was adopted. The Camerons raised 11 children, five of their own, five orphaned children of relatives and an Irish girl named Mary Ryan whom they found begging on Putney Heath and whom Julia used as a model in her photographs.

Through the early 1840s Julia became a prominent hostess in Anglo-Indian society acting as the organiser of social engagements for Governor Lord Hardinge. During this time she also corresponded with Herschel about the latest developments in photographic technology. In 1839, Herschel informed Cameron about the invention of photography, and in 1842, he sent her two dozen calotypes and daguerreotypes, the first photographs she ever saw.

The Camerons retired to England in 1845, where they took part in London’s artistic and cultural scene. Julia often visited Little Holland House in Kensington, London, where her sister, Sara Prinsep, oversaw a literary and artistic salon “of Pre-Raphaelite painters, poets and aristocrats with artistic pretensions”. There she met many of the well-known subjects of her later portraits, including Henry Taylor and Alfred Tennyson.

In 1847, Julia was writing poetry, had started a novel and published a translation of Gottfried August Bürger’s Leonora. In 1848, Charles Cameron retired fully and invested in coffee and rubber plantations in Ceylon, becoming one of the island’s largest landowners. The Camerons settled down in England, first in Tunbridge Wells in Kent, where they were neighbours of Henry Taylor, and then to East Sheen in 1850. During this time, Julia became a member of a society for art education and appreciation and George Frederic Watts started working on a painting of Julia.

In 1860, after an extended visit to Alfred Tennyson at the seaside village of Freshwater, on the Isle of Wight, Julia hastily purchased a property next door to Tennyson. The family moved there, naming the property “Dimbola” after one of the coffee plantations in Ceylon.

A private gate connected the residences and the two families soon started entertaining well-known personalities with music, poetry readings and amateur plays, creating an artistic scene much as what was previously found at Little Holland House. Julia lived there until 1875.

Julia showed an interest in photography in the late 1850s and there are indications that she experimented with making photographs in the early 1860s. Around 1863, her daughter and her son-in-law gave her her first camera (a sliding-box camera) as a Christmas present. The gift was meant to provide a diversion while her husband was in Ceylon tending to his coffee plantations. Of the gift, her daughter stated “It may amuse you, Mother, to try to photograph during your solitude at Freshwater.”

After receiving the camera, she cleared out a chicken coop and converted it into studio space. Later, in an unfinished autobiographical manuscript titled Annals of my Glasshouse, Cameron wrote:

I turned my coal-house into my dark room, and a glazed fowl house I had given my children became my glass house. The hens were liberated, I hope and believe not eaten. The profit of my boys upon new laid eggs was stopped, and all hands and hearts sympathised in my new labour, since the society of hens and chickens was soon changed for that of poets, prophets, painters and lovely maidens, who all in turn have immortalized the humble little farm erection. […] I began with no knowledge of the art… I did not know where to place my dark box, how to focus my sitter, and my first picture I effaced to my consternation by rubbing my hand over the filmy side of the glass.

On 29 January 1864 Julia photographed nine‐year‐old Annie Philpot, an image she described as her “first success”. She sent the photograph to the subject’s father with the note:

My first perfect success in the complete Photograph owing greatly to the docility & sweetness of my best & fairest sitter. This Photograph was taken by me at 1 p.m. Friday Jan. 29th. Printed—Toned—fixed and framed all by me & given as it is now by 8 p.m. this same day.

That same year, Julia compiled albums of her images for Watts and Herschel, registered her work and prepared it for exhibition and sale, and was elected to the Photographic Society of London, of which she remained a member until her death and where she displayed work at yearly exhibitions.

Though Julia took up photography as an amateur and despite never making commissioned portraits nor establishing a commercial studio, she thought of her photographic activity as a professional endeavour, actively copyrighting, publishing, and marketing her work.

Her family did not see substantial profits from their coffee plantations in Ceylon and Julia may have been looking to bring in some money with her photography. The portraits of celebrities and the high volume of her photographic output also suggest commercial aspirations.

In 1865, Julia became a member of the Photographic Society of Scotland and arranged to have her prints sold through the London dealers P. & D. Colnaghi. She presented a series of photographs, The Fruits of the Spirit, to the British Museum, and held her first solo exhibition in November 1865. Her prints generated robust demand and she showed her work throughout Europe, securing awards in Berlin in 1865 and 1866, and an honourable mention in Dublin.

Julia’s photographic activity was supported by her husband. She wrote: “My husband from first to last has watched every picture with delight, and it is my daily habit to run to him with every glass upon which a fresh glory is newly stamped, and to listen to his enthusiastic applause.”

In August 1865, the South Kensington Museum (now the Victoria and Albert Museum) purchased 80 of her photographs and in 1868 the museum offered her two rooms to use as a portrait studio, essentially making her the museum’s first artist-in-residence.

In 1867, Julia produced images of Thomas Carlyle and John Herschel. By 1868, she was generating sales through P. & D. Colnaghi and a second London agent, William Spooner. In 1869, she created The Kiss of Peace, which she considered her finest work.

In the early 1870s, Cameron’s work matured. Her elaborate illustrative tableauxs involving religious, literary, and classical figures peaked in a series of images for Tennyson’s Idylls of the King, published in 1874 and 1875, evidently at her expense. During this time, she also wrote Annals of my Glass House, an unfinished memoir recounting her photographic career.

In 1875 due to her husband’s ill health Julia and her husband left Freshwater for Ceylon with “a cow, Cameron’s photographic equipment, and two coffins, in case such items should not be available in the East”. This decision also depended on the lower cost of living, as well as the advantage of being be nearer to their sons who were managing the family coffee plantations.

Mr. and Mrs. Cameron have taken their departure for Ceylon, there to live and die. He had bought an estate there some thirty years ago when he was serving the Crown there and elsewhere in the East, and he had a passionate love for the island, to which he had rendered an important service in providing it with a code of procedure . . . he never ceased to yearn after the island as his place of abode, and thither in his eighty-first year he has betaken himself, with a strange joy. The design was kept secret, — I believe even from their dearest relatives.

V.C. Scott O’Connor later wrote about the absence at their vacated home in Freshwater:

The house is silent now and tenantless. All its old feverish life and bustle are stilled as is the heart which beat here in true sympathy with every living creature that came within its reach needing such succor. Her pretty maids, her scholars, her poets, her philosophers, astronomers, and divines, all those men of genius who came and sat willingly to her while in a fever of artistic emotion she plied the instruments of her art, — they have all gone, and silence is the only tenant left at Dimbola.

The move effectively marked the end of Julia’s photography career as she took few photographs afterwards, mostly of Tamil servants and workers. Cameron’s output may have dropped in part because of the difficulty working with collodion in the insect-friendly heat where fresh water was less available for washing prints.

The walls of the room were covered with magnificent photographs; others were tumbling about the tables, chairs, and floors with quantities of damp books, all untidy and picturesque; the lady herself with a lace veil on her head and flowing draperies. Her oddities were most refreshing . . . She also made some studies of natives while I was there, and took such a fancy to the back of one of them (which she said was absolutely superb) that she insisted on her son retaining him as her gardener, though she had no garden and he did not know even the meaning of the word.

In February 1876, Macmillan’s Magazine published her poem, On a Portrait. The following year, her image The Parting of Sir Lancelot and Queen Guinevere appeared on the cover Harper’s Weekly as a wood engraving.

After a short visit to England six months earlier, Julia fell ill with a dangerous chill and died on 26 January 1879 at the Glencairn estate in Ceylon. It is often reported that her last word was “Beauty” or “Beautiful”.

In her 12-year career, Julia produced around 900 photographs, a truly remarkable deed for the time period in which she lived in.

Glimpse through her portraits